Learn how to make paper out of dryer lint with this great tutorial from Melinda.

I thought I’d share how I made the base for my Artist Trading Card that I created. You can then use this unique & beautiful paper for gift tags, note cards, or as part of a collage or other scrap booking project. Thanks to The Go Green Blog and Instructables for the basic tutorial steps! 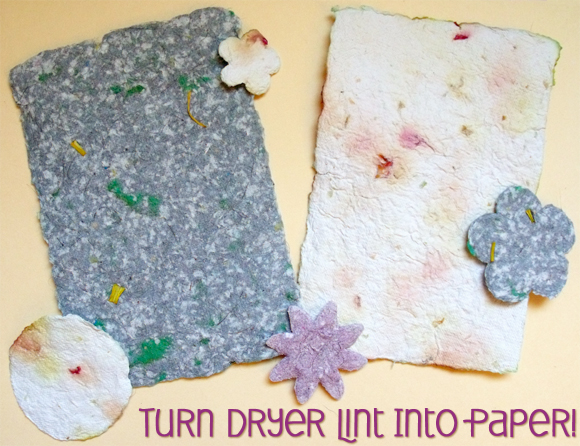 Total: Free and up

Notes: To get a specific color of lint, either dry that color of clothing, or add food dye (I added purple to the batch in the picture) to the water when you let the lint soak.

You can also add other ingredients to be soaked in the water like shredded paper (Use plain white or colored. If you use paper that is printed on, the ink will run and dye the whole mix)) or leaves and flowers. Both paper and leaves will give the lint paper more body in the end. (I added the paper in at the blender step, and it didn’t get broken up and mixed in – it showed up as speckles. Decide now how you want your end-product to look so you know if you should soak your paper or wait until the blender step.)

If you want your paper to be sturdier, add some corn starch slurry (pre-mixed warm water and corn starch), just like you would to thicken gravy.

If you decide to use screening and frames, view the Instructables tutorial.

I went for cheap and easy – I went to my local Dollar Tree and purchased a splatter screen (similar to the one pictured) and a wooden 4×6 picture frame with the glass and backing removed. I also made a few smaller pieces using metal cookie cutters! 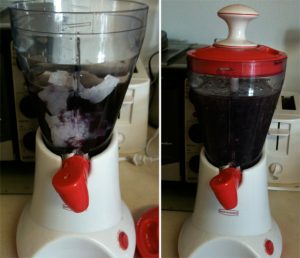 The next step is to liquefy the lint in a blender.

Scoop about one cup of lint and put it in the blender, then add water to fill the rest of the blender until it is close to the top. (If you fill it too much, water may try to escape out from under the lid, so be careful!)

There should be more water than lint in the blender. Blend until it is smooth and mushy. (We had an old smoothie blender, so we could use the “stick” to make sure all the pieces were evenly blended)

If you used a deckle and mold, follow the Instructable tutorial for this step.

If you used a splatter guard and a frame or cookie cutter, balance the splatter guard on the edge of your tub (to catch the runoff water). Hold the mold firmly on the screening (I had help doing this so that nothing would leak out the sides and ruin the shape of my final project). Pour slurry into mold. You want to be sure to pour it in evenly over the surface so you don’t have any bare spots showing. Pour in a little for thin paper (but be careful – if it’s too thin, it will fall apart), or pour in a lot for thicker paper. This is a great time to experiment with thickness. If you don’t like it after the next step, just throw it back in the blender!

Note: My cookie cutter mold is pictured to the right. To use a picture frame, put the flat surface on the bottom (my frame had some beveling on the front). That way you get a nice, clean shape.

If you used a deckle and mold, follow the Instructable tutorial for this step.

If you used a splatter guard and a frame or cookie cutter, sift the mold and mush the slurry around a little to get it in all the corners, and even things out a bit. Having an extra set of hands to hold the frame down to the screen was helpful because the screen was a little flexible, so we wanted to make sure the frame was tight against the screen. Then let it sit for a few seconds to drip (I even pushed down on the slurry some to push out the extra water and make sure I had an even coating).

Step 6 – Off the Mold and onto the Fabric

Now place the mold face down onto a piece of fabric or a towel so that the lint is on the fabric. (If you used a cookie cutter or frame, gently remove the paper and leave it on the screen).

Use a sponge (or the top half of the towel as shown on right side of photo) to press the lint onto the fabric and to soak up excess water.

Then slowly lift the mold/screen off of the fabric so that the lint is left.

If you are making multiple pieces of paper, then place another piece of fabric/towel on top of the lint and repeat the process. Once you are finished you can add books on top of the stack of fabric to flatten out the paper and press out the water.

After several hours (mine took about 6 hours indoors) remove the books and allow the lint to completely dry.

If the paper still seems really wet, swap out the towels for dry ones, and repeat the process. If you don’t use the books, you will get bendy paper as it dries, so this is important. If you don’t use any plant material, you may be able to iron the paper a little through a towel.

Once the lint is dry, you have your very own Lint Paper! After mine dried, I glued on some dried flowers. On another piece, I added some Prima paper flowers with rhinestones.

Try it with different colors of lint, food coloring and paper you added to the mix. Also try different additions – leaves, flowers, glitter, anything you can think of! Each piece of paper is it’s own work of art!

Very cool project! Thanks so much for sharing Melinda!

Hello, I'm Allison! I am an Army wife and momma to two little girls. I've got a creative side and I love to craft, do DIY projects with my husband, paint, and I occasional get my bake on too. Join me on my journey and take a glimpse inside our military adventures, my creative endeavors and our everyday life. :)